Friction stir (FS) technologies are a family of “green” processing and joining technologies that involve local mechanical stirring of metallic workpieces or sets of metallic workpieces with specially designed interchangeable, non-consumable tool bits referred to here as Stirbits®. The purpose of the FS process includes: 1) to locally modify (refine and consolidate) the microstructure of the metal within a given workpiece, and/or 2) to permanently join a set of workpieces. The basic process is carried out in the solid state and involves forcing a spinning, non-consumable tool into the workpiece(s) and then along a prescribed path, e.g. along the joint line between two or more components to be joined. Because the processed material remains solid (not becoming liquid) throughout the process cycle, FS tools experience frictional wear with use and are, therefore, periodically replaced in production operations to maintain the prescribed tool geometry.

“Friction stir butt welding” was first introduced by The Welding Institute (TWI) of Cambridge, UK, in 1991 as a permanent butt joining process for metals and a limited number of plastics. [1] The process soon became known as “friction stir welding” (FSW) [2] as the use of the technology was expanded to include lap joints, corner joints, combined butt and lap (hybrid) joints, fillet joints, etc., in addition to butt joints. [3]

Variants of FSW have been introduced since the initial disclosure of FSW. These include multiple forms of friction stir spot welding (FSSW) [4] and friction stir processing (FSP). [5] Other variants include friction stir additive manufacturing. FSW and the related technologies, FSSW and FSP, may be referred to collectively as friction stir (FS) technologies. Each of these technologies is intended to be carried out below the solidus temperature of the workpiece(s) and is thus considered a local solid-state fabrication process having aspects similar to other forms of wrought metal working processes such as forging and extruding.

The following is a qualitative description of the periodic nature of friction stir technologies. The text is from a paper presented by Dr. Burford at the 9th International Friction Stir Welding Symposium held at The Von Braun Center in Huntsville, AL from 15-17 May 2012. It is an expanded version of a portion of the discussion included in a paper given earlier at the 6th Annual Technical Review Meeting of the FAA Joint Advanced Materials & Structures (JAMS) Center of Excellence held during May 19–20, 2010.

In FSW, the side of the weld tool probe is pressed against the workpiece in a manner similar to that of machining with the side of an end mill. However, unlike end mill machining, in FSW the tool design and process parameters are selected such that the displaced material is captured, reconstituted, and joined back to the original material – as opposed to removing it from the work zone in the form of “chips” as is done in machining. Consequently, there are both similarities as well as dramatic differences in the dynamic response of the respective tools used in end milling and FSW, respectively.

In machining, it is important to clear the cut metal (chips) from the tool at a sufficient rate to prevent clogging of tool features, namely the flutes, etc. In FSW the opposite is true. The features of a FSW tool, such as threads, grooves, etc., are expected to become impacted with metal and thereby maintain a full frontal engagement between the tool and the material of the workpiece. In machining, only the tool cutting edges are expected to be in contact with the material ahead of the cutting front. This full engagement between the FSW tool and workpiece leads to unique dynamic behavior not typically experienced in machining. Notwithstanding the differences in tool engagement with the workpiece, however, the two processes share similar behaviors because of the similarities in which the tools are dynamically loaded (i.e. by side loading caused by advancing a rotating tool through the workpiece).

Advanced control techniques in machining have been investigated for reducing chatter. For example, Zhang and Sims [6] assessed the ability of “piezoelectric active vibration damping” to arrest chaotic tool behavior. To reduce defect formation in FSW associated with chaotic tool motion, Arbegast, [7] Boldsaikhan et al., [8] and Jene et al. [9] have studied machine tool-workpiece interactions by monitoring force feedback signals. As these studies demonstrate, in both machining and FSW, process monitoring can serve as the basis for reducing chaotic tool behavior and, thereby, provides a means for improving part quality in FSW as it has in machining.

In FSW and under particular conditions, the tool tends to oscillate side-to-side (nominally transverse to applied loading vector) while under the local dynamic side loading conditions imposed on the tool at the tool-workpiece interface. [10] In machining, when the tool oscillates in a chaotic manner, a self-excited vibration phenomenon called “chatter” tends to form, leaving erratic markings on the newly cut surface. Similar chaotic oscillations in FSW tend to be associated with the formation of volumetric defects (voids) within the joint, resulting from the lack of consistency in the reconsolidation of material along the joint line. [11]

This sequence of events leads to a repeating process of heating and shearing followed by heating and shearing (heat – shear – heat – shear …). The new interface ahead of the tool is again pressed upon until it is sufficiently heated to move the next band of material along the tool front from the advancing side to the retreating side. This undulation in metal movement along the leading edge of the tool promotes an oscillatory or alternating pattern in both normal and shear forces acting on the tool surface, which in turn causes the tool to move in a periodic or oscillatory motion, nominally side-to-side, as the tool is advanced. This process is schematically depicted in Figure 1. 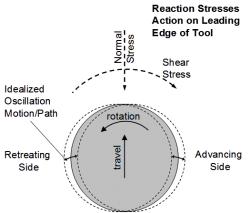 Figure 1: Schematic swept volume cross-section of a generic FSW tool probe located midway below the tool shoulder and the end of the probe. [10]

The schematic in Figure 1 depicts the idealized oscillation of a mid-plane cross-section of a weld tool as it advances. Tool rotation is counter-clockwise and the direction of travel is toward the top of the page. The reaction forces act on the tool in opposition to the tool motion. A periodic shearing and movement of metal along the leading edge of the tool – from the advancing side to the retreating side – results and the tool oscillates side-to-side (nominally) in response to the dynamic reaction forces acting on the leading edge of the FSW tool probe. Material flow and the associated resultant forces acting upon the tool are actually much more complex than idealized in the model shown in Figure 1. With the tool probe completely submerged in the work-piece, forces act on the probe from multiple directions in response to its dynamic loading environment, the resultant of which may be measured experimentally. [12] The full engagement of the rotating, advancing FSW tool further aggravates its tendency to oscillate in a chaotic manner. Adding to the complexity of FSW tool oscillatory motion is the spinning motion of the tool shoulder face on the surface of the work-piece. This tends to cause a wandering or walking motion of the end of the tool, which even further promotes chaotic tool behavior as the tool seeks (or seeks to establish) a center of rotation on the work-piece surface. Uniformity in FSW tool oscillations is dependent upon the periodicity (or lack thereof) in the material flow behavior around the tool front. It is anticipated that the lower the abruptness in the material heating and shearing cycle, the less likely the process will become chaotic in its behavior (action). Selection of tool features and process parameters are expected to contribute to the overall stability of the tool control process.
References
1. International Publication Number WO 93/10935, Improvements Relating to Friction Welding, June 10, 1993
2. UK Patent Application GB 2 306 366, Friction stir welding, May 7, 1997
3. European Patent Specification EP 0 752 926, May 27, 1998
4. Examples include: International Publication Number WO 0 128 732, United States Patents 6,601,751, 6,604,667, 6,722,556, 7,562,803, 7,121,451, and 8,444,040.
5. Examples include: European Patent Specification EP 1 162 283 and EP 1 690 627, United States Patents 6,866,180, 6,712,916, 8,220,693, and United States Patent Application US 2005/070374.
6. Y. Zhang and N. Sims, “Milling workpiece chatter avoidance using piezoelectric active damping: a feasibility study,” Smart Mater. Struct., vol. 14, p. N65–N70, 2005.
7. W. Arbegast, “Modeling Friction Stir Joining as a Metalworking Process,” in Hot Deformation of Aluminum Alloys III, 2003.
8. E. Boldsaikhan, A. Logar and E. Corwin, “Real-Time Monitoring in Friction Stir Welding: The Use of Feedback Forces for Nondestructive Evaluation of Friction Stir Welding,” Lambert Academic Publishing, 2010.
9. T. Jene, G. Dobmann, G. Wagner and D. Eifler, MonStir – Monitoring of the Friction Stir Welding Process, 7th International Symposium on Friction Stir Welding ed., Awaji Island, Japan, 20-22 May 2008.
10. D. A. Burford, P. Gimenez Britos, E. Boldsaikhan and J. Brown, “Evaluation of Friction Stir Weld Process and Properties for Aerospace Application: e-NDE for Friction Stir Processes,” vol. 6th Annual Technical Review Meeting, 19 May 2010.
11. E. Boldsaikhan and D. Burford, “Generalized e-NDE Algorithm for Friction Stir Welding,” in 9th International Friction Stir Welding Symposium, The Von Braun Center, Huntsville, AL, May 15-17, 2012.
12. ibid